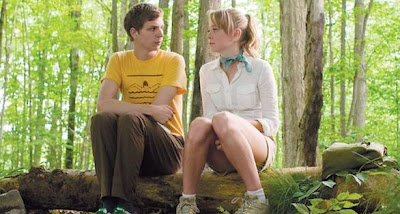 Michael Cera is inspired to be bold by Portia Doubleday.

Michael Cera carries the burden of his familiar presence lightly enough to keep from wearing out his welcome. In Youth in Revolt, Cera (familiar from Juno and Superbad) again follows in his own footsteps, playing a baby-faced high-school kid who's afraid he'll die a virgin.

Obviously, we've been down this road before, but director Miguel Arteta (The Good Girl and Chuck & Buck) works hard to provide some fresh views, an effort that probably leads to the movie's overly generous helping of eccentricity. It's possible to argue that Youth in Revolt is too quirky by half, but it does offer some real laughs with Cera doing double duty as Nick Twisp and Francois Dillinger. Nick is a high-school student with limited social skills; Francois is Nick's alter ego. A figment of Nick's imagination, Francois encourages Nick to assert his independence.

What motivates Nick to rebel in extreme fashion, practically burning down an entire Berkeley block? Nothing less than love -- with some lust thrown in for good measure. When Nick's divorced mother (Jean Smart) and her low-life boyfriend (Zach Galifianakis) drag him off to a trailer court for a vacation, Nick meets Sheeni (Portia Doubleday).

Suddenly, Nick's life turns around. He finds a potential love interest, although a variety of obstacles clutter Nick's path. Sheeni, a teen-age Francophile, has a preppy boyfriend (Jonathan B. Wright). Her parents (M. Emmet Walsh and Mary Kay Place) are born-again zealots.


Arteta uses bouncy animated segments for scene-to-scene transitions, and keeps the movie moving. If the comic ideas don't always play out in hilarious fashion, you at least get to see what Willard might look like if he happened to eat one too many psychedelic mushrooms. I don't suppose I have to tell you that it's not a pretty sight. It is, however, a funny one.

Posted by Robert Denerstein at 9:00 PM