He's back -- and out for vengeance 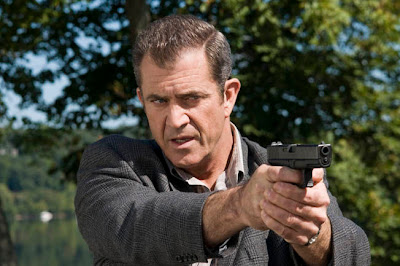 Mel Gibson aims for revenge in Edge of Darkness.

Mel Gibson hasn't starred in a movie since 2002 when both Signs and We Were Soldiers hit the nation's screens. Gibson's back with a vengeance -- literally -- in Edge of Darkness, a movie with a trailer that makes it look like another heir to the Death Wish revenge fortune that Hollywood has been spending for years.


The good news: Instead of being a simple revenge saga, Edge of Darkness is a complicated one. That's also the bad news because a strong performance by Gibson and lots of tasty bits don't always fuse into a propulsive whole.


This being January, however, we'll take what we can get and be content that Edge of Darkness isn't as blatantly derivative as expected. Partly this stems from the movie's origins, a 1985 six-part BBC miniseries that, by all accounts, was more sophisticated and psychologically nuanced than its big-screen successor.

Condensed to movie length -- a touch under two hours -- Edge of Darkness starts beautifully but piles up plot twists as quickly as cars in a chain reaction crash. Even worse, it casts a broad web of suspicion, swiping at both big business and government, but never with a sense of real conviction.


What does ring true is the grief and rage Gibson's character experiences when his daughter is murdered in front of him. Gibson plays a solid guy with working-class values, a Boston detective who feels compelled to learn the truth about his daughter (Bojana Novakovic). Gibson's Thomas Craven is accustomed to holding his feelings in check, but his daughter's murder shatters his life beyond repair.


No mention is made of what happened to Craven's wife. We assume she died because Craven isn't the type to have gotten a divorce. He raised his daughter alone, and she has grown up to be an MIT grad who works as a research scientist for a large company. She visits Craven in the movie's crisply edited opening, but is shot down before she can tell him what's really on her mind.


Director Martin Campbell (best known for the Bond movie, Casino Royale), makes resonably good use of some small performances, most notably from Ray Winstone, who plays a mysterious guy who specializes in cleaning up messes for the government. Winstone finds the perfect pitch for a character who operates so far outside the law he's unbothered by anything resembling conventional morality. There's nothing much that Winstone's character hasn't seen -- or done. We believe that.


No fair telling more, but know that the movie spins a thick web of corruption and deceit -- too thick, I think. And considering that Gibson directed Passion of the Christ, a movie that still provokes arguments, I wondered whether it was advisable to give him a line in which his character confronts a Republican senator from Massachusetts by asking whether the senator's hanging on the cross or banging in the nails? Nice dialogue, but how can we watch Gibson deliver such a line without remembering who he is and some of the things he's said during his worst moments? And, no, I'd rather not think about the real Mel Gibson.


Additional problems crop up, as well: Craven sometimes talks to his deceased daughter – and we occasionally see her ghostly presence, an overused ploy that adds unnecessary sentiment. Some parts of the movie (I can't say which without adding spoilers) require an awfully generous suspension of disbelief.


But, hey, Edge of Darkness held my interest as it built toward the kind of overstated, vengeful finale that's both too emphatic and shamefully satisfying. Edge of Darkness expresses trendy cynicism about the establishment world, but owes its real credibility to Gibson, who remains convincing even when the script no longer is.