A mini-series reaches the big screen, bringing lots of questions with it. 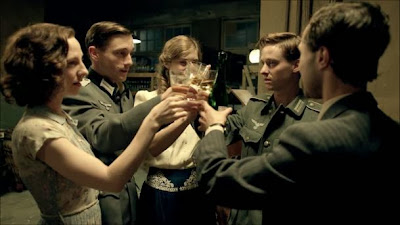 In general, I don't believe in holding grudges. But when it comes to Nazis, I'm more than willing to make an exception. That's part of the reason I had difficulty with Generation War, a German mini-series that has been brought to U.S. screens, four hours and 39 minutes worth of movie shown in two parts.

Like most mini-series, Generation War (an attempt to show the war from the viewpoint of ordinary young Germans) catches you in its melodramatic rhythms. It's certainly not a borefest. But, there's a big "but" here, and I'll get to it shortly.

Although few of the characters in Generation War are Nazi supporters, they're all initially caught up in optimism generated during the early days of the war, a mood that diminishes dramatically as it becomes clear that Germany has lost the war and that casualties on the Russian front are nothing less than devastating.

The screenplay focuses on five friends. Viktor (Ludwig Trepte) is a young Jewish man who's in love with Greta (Katharina Schuttler), a young German woman who aspires to a singing career. Wilhelm (Volker Bruch) and Friedhelm (Tom Schilling) are brothers who are about to begin their tours of duty.

Whilhelm, an officer in the Wehrmacht and the movie's narrator, is the more gung-ho of the two. The sensitive Friedhelm, scorned by his harsh father, seems reluctant to take up arms. By the movie's end, he has become emotionally numb. He can kill without blinking, and seems to have surrendered to the belief that life is one big slaughterhouse.

Charlotte (Miriam Stein) is a nurse's aide who's eager to serve on the Eastern front, partly because she's in love with the reserved and dutiful Whilhelm. He seems intent on avoiding any emotional entanglements for fear that he won't survive the fighting.

The movie's most developed ambiguity centers on Greta, who takes up with an S.S. bigwig in order to secure Viktor's safety and to advance her career. Her Nazi lover helps turn Greta into a celebrity, and then betrays her.

As directed by Philipp Kadelbach, Generation War weaves its five stories into a coherent whole, although -- by the end -- Stefan Kolditz's screenplay begins to rely on a preposterous number of coincidences.

The genocidal plans of the Nazis are acknowledged, but the focus of sympathy here is with soldiers and civilians ensnared by forces bigger than themselves.

The film is skillfully enough made to create sympathy for characters who are put through war's wringer. The combat footage is suitably harrowing.

But the message may be boil down to something along the lines of a bromide: Everyone suffers when the bombs begin falling.

But there are those who have insisted that the movie's separation of characters into good and bad Germans tends to encourage a form of national absolution. Those voices shouldn't be ignored.

Others have complained that the movie's portrayal of Polish resistance fighters as anti-Semitic dishonors those Poles who opposed the Nazis.

Those are just a few of the "buts'' that limit Generation War's accomplishments.

The best you can say is that the needle on Generation War's moral compass tends to wobble. It's interesting to see how some Germans might view the war years, but it's equally difficult to watch this epic production without being bombarded by second thoughts.