A trip to Cambodia's killing fields 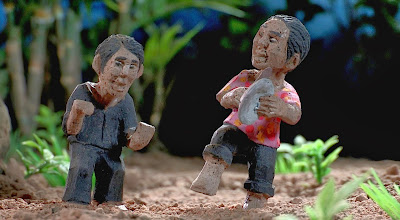 In 1975, the Khmer Rouge took over the Cambodian capital of Phnom Penh, and the years of the killing fields began. Filmmaker Rithy Panh deals with the rise of Pol Pot and his murderous cohorts in a way that, at first blush, seems a total mismatch of style and subject. To make The Missing Picture, Panh mixes news footage, photographs and most surprisingly, dioramas made with clay figures carved by Sarith Mang. Mang's crude but tender mini-sculptures illustrate the fate of those who suffered and died under Pol Pot -- among them, Panh's family. Panh was 13 when his family was expelled from Phnom Penh. Panh's mixed-media approach works to heighten the sense of loss that prevades the movie. A narration -- delivered by Randal Douc and written by Christophe Bataille, who also co-wrote Panh's memoir -- further personalizes the story. Panh, who now lives in France, uses immobile clay figures to create scenes of happiness that quickly dissolve into horror as his family is sent to a labor camp. Panh's father ultimately chose starvation over submission to his tormentors, something the movie's narration calls an exercise of "free will." The Missing Picture carries us on a journey that not only contributes to a redefinition of the word "documentary," but takes us to the wounded heart of a genocide that never should be forgotten.
Posted by Robert Denerstein at 11:10 AM