An Indian romance -- with great food

A story built around a contrivance -- but one that works. 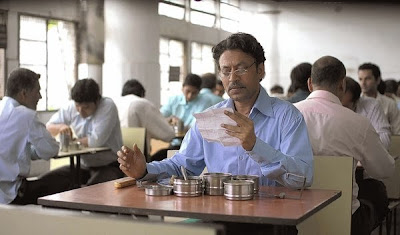 The Lunchbox -- a first feature from Indian director Ritesh Batra -- may well leave you an appetite for two things: home-cooked Indian food and the possibility of bridging the loneliness gap.

Batra, who also wrote the screenplay, builds his movie around deliverymen who bicycle their way through Mumbai, some of them delivering hot lunches to a regular clientele. Some of these lunches are prepared by restaurants and some by spouses.

Nimrat Kaur) is one such wife, a woman who makes lunches for her mostly unappreciative husband (Nakul Vaid).

Ila wants to recapture the heart of a husband who has grown indifferent. With advice from an upstairs neighbor who yells instructions out her window, Ila begins putting special effort into preparing her husband's lunches.

Given the complexity of Mumbai's delivery system -- depicted by Batra in near-documentary style -- it's a wonder that anything arrives at the right place at the right time.

The story hinges on the fact that mistakes do happen. Thanks to a mix-up, Ila's delicious lunches wind up awakening the wrong palate. The recipient of Ila's culinary efforts is Saajan (Irrfan Khan), an older widower who works as an accountant and who is on the verge of retiring.

At first reluctantly and then with a bit more enthusiasm, Saajan begins to train his replacement (Nawazuddin Siddiqui).

When Ila learns that it's not her husband who's receiving the lunches, she begins enclosing small notes in the lunch boxes that are returned to her after each meal.

Saajan responds to the notes, and we become ensnared by the movie's big question: Will the two ever meet?

Beautiful and warm, Kaur is perfectly cast as Ila, and Khan projects a calm and steady presence. He's playing the kind of character we don't often see in films, a really good guy.

There's another refreshing thing about The Lunchbox. Like many movies, it's built around a contrivance. This time, though, the contrivance works to challenge the characters rather than to simply kick the story forward.

Batra seems to understand that a bustling, vital city either can revivify the spirit or drown it in loneliness. He has found an engaging way to spin a tale about two burdened hearts longing for fulfillment.


Posted by Robert Denerstein at 2:30 PM