An eerie drama about look-alikes 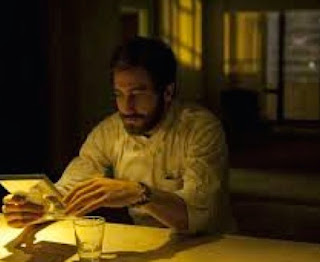 Gyllenhaal, who worked with Villeneuve on last year's Prisoners, plays two roles: He’s Adam, a psychologically repressed history professor, and Anthony, an actor with a big personality. The professor seems disconnected from things; the actor is more outgoing.

The movie kicks off in earnest when Adam rents a movie called Where There's a Will, There's a Way. While watching this minor cinematic effort, he notices a background character who looks exactly like he does.

Adam then begins an obsessive search to find and meet his doppelganger.

The movie invites us to play a mind game. Are we really looking at separate lives or at different aspects of the same life?

Did I mention the spiders? Images of spiders crop up throughout, seriously augmenting the movie’s creepiness.

Gyllenhaal handles both roles effectively, and Villeneuve and cinematographer Nicolas Bolduc get plenty of mileage out of the movie’s well-selected Toronto locations: Faceless apartments suggest an alien landscape in which anonymity borders on estrangement.

Enemy sustains interest, but never seems quite trippy enough to be entirely satisfying. Imagine the same material in the hands of a director such as David Cronenberg, and you’ll know what I mean.

As befits such a purposefully ambiguous effort, Villeneuve’s surprising final shot is open to interpretation — perhaps too much so.*
*Enemy has been available on VOD, where I saw it, and is now beginning a theatrical at the Sie FilmCenter.

Posted by Robert Denerstein at 12:15 PM