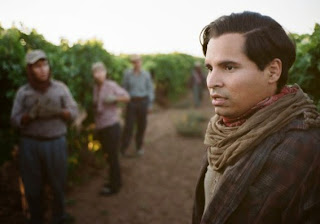 Cesar Chavez, a truncated bio-pic about one of the country's most famous labor organizers, offers a step-by-step look at the hard work of winning decent working conditions and reasonable wages for migrant laborers in California.

Director Diego Luna, who starred in Y Tu Mama Tambien and who previously directed a small movie called Abel, does a solid job of refreshing memories about Chavez's landmark efforts during the 1960s.

Working from a script credited to Keir Pearson and Timothy J. Sexton, Luna concentrates on the five years in which Chavez (Michael Pena) helped organize the workers who picked grapes for California wine growers.

After deciding he needed to be closer to the workers he was trying to help, Chavez moved his family to the agricultural town of Delano, Ca., and began the arduous work that resulted in the formation of the Farmer Workers Union.

The rest of the supporting cast doesn't make much of an impression. A grower named Bogdanovitch (John Malkovich ) becomes the movie's main bad guy. Wes Bentley makes a brief appearance as a lawyer who helps Chavez. We also see Robert Kennedy (Jack Holmes), who turned up to support Chavez during a 25-day hunger strike that he staged.

Please, a moratorium on actors playing Kennedys. It almost always a distraction.

Chavez's wife Helen (America Ferrera) proves a woman of independent spirit, and, at times, Chavez's devotion to the farm workers causes him to spend less time with his oldest son than he'd like.

Pena portrays Chavez as a regular guy who believed in non-violence and who had no doubt that the farm workers were being exploited. His convictions seem almost inbred, an inseparable part of his being.

At times, Cesar Chavez can feel too routine, and the use of news footage doesn't do much to expand the movie's reach. We don't learn much about Chavez's eight children, and if Chavez had deep personal failings, the movie isn't interested in finding them.

Still, Cesar Chavez is represented as a tireless leader who wrought major changes and whose story deserves to be told. Viewed as an expansion of the voices represented in American movies, I'd call it a start. Let's hope it's not the finish.

Posted by Robert Denerstein at 3:45 PM