'Divergent' has a derivative feel 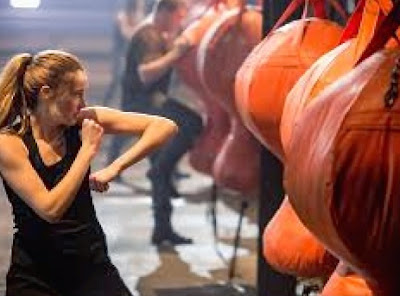 If we hadn't seen any of The Hunger Games movies, Divergent might have felt fresher, less like a medium-grade helping of dystopian sci-fi built around a young female character who learns to kick butt.

The fact that we have seen The Hunger Games may explain why Shailene Woodley, as the star of Divergent, sometimes seems to be standing in for Jennifer Lawrence, star of The Hunger Games.

It also may help us understand why a test that divides 16-year-olds into factions based on personality seems to be substituting for the lottery in Hunger Games.

You get the idea. It's difficult to watch Divergent, an adaptation of a 2011 novel by Veronica Roth, without making comparisons to The Hunger Games, the big-screen version of Suzanne Collins's 2008 novel.

Both books involve a rigidly divided society, a strong female main character and an oppressive social order. The stories, of course, are different, but on screen, Divergent has trouble staking out new turf.

To make matters worse, this first adaptation of Roth's trilogy of novels takes a long time reaching what feels like too paltry a payoff.
Set in a dystopian Chicago of the future, Divergent focuses on Beatrice Prior (Woodley), a young woman who has reached the age at which she must decide which of five factions she wants to join.

Youngsters are asked to choose one of five factions: Abnegation, Amity, Candor, Dauntless or Erudite, depending on whether they're judged to be self-sacrificing, friendly, honest, brave or smart.

A rare case, Beatrice doesn't fit into any category. That classifies her as a Divergent, someone who doesn't belong.

Instead of turning her in, Beatrice's tester (Maggie Q) tells her to pick a faction and do her best to fake it. Beatrice opts for Dauntless, the warrior faction that serves as the city's army and police force.

Beatrice's choice surprises her parents (Tony Goldwyn and Ashley Judd), well-meaning folks who are part of Abnegation. Once part of Dauntless, Beatrice takes the name Tris.

Beatrice's brother Caleb (Ansel Elgort) also raises eyebrows. He chooses Erudite, a faction that the Prior parents suspect is plotting to take over the city, all that's left after a war that devastated the rest of the country.

The Erudite faction is led by Jeanine Matthews (a blonde and icy Kate Winslet). Matthews tells young people to choose freely, but is so obviously authoritarian that there's little suspense about her character. We know from the start that she's to no damn good.

The movie focuses primarily on Beatrice's training to become a full-fledged member of Dauntless. She does this under the tutelage of the handsome Four (Theo James) and the mean-spirited Eric (Jai Courtney).

Setting all this up requires a fair amount of less-than-thrilling exposition. Although the early training sequences can be exciting, the three-stage development of Dauntless recruits doesn't generate enough episode-to-episode tension.

Most of the training seems to involve throwing recruits into sink-or-swim situations. We seldom see anyone receiving anything resembling instruction. The point may be to create a survival-of-the-fittest atmosphere, but it hardly seems the best way to develop future combatants.

Those who wash out of the Dauntless program, by the way, are relegated to living in the streets, part of the mass of folks who are factionless and, therefore, excluded from society's largess.

Woodley ably hints at Beatrice's delight in discovering her new aggressiveness and physicality, but isn't entirely convincing when she swings into action. James's character tends to be a trifle bland.

A prolonged finale is compromised by obvious dialogue about individual freedom and conformity that restates points director Neil Burger (Limitless) already has made.

Now that Divergent has broken the ground with this two-hour and 19-minute version, it's possible that the big-screen adaptations of the next two installments will be fleeter and deeper. Let's hope.