It's definitely not in the bag

The Bag Man continues the apparently endless attempt to bring film noir back to life. 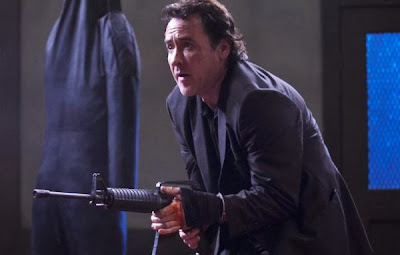 I've had it with neo-noir, particularly when the attempt turns hollow and pointless, as is the case with the new thriller The Bag Man.

A battered-looking John Cusack stars as Jack, a hitman who's sent on a mission by a mysterious and apparently powerful man named Dragna (Robert De Niro). Jack's asked to travel to the Louisiana bayour, pick up a bag, hide out in room 13 of rundown motel, and wait for Dragna to pick up the bag. Jack will be richly rewarded for his efforts, but there's one catch: He's not allowed to look in the bag.

En route to the movie's less-than-surprising finale, Jack also must kill a variety of folks who are trying to kill him.

At the motel, he finds himself increasingly entangled with a woman named Rivka (Rebecca Da Costa), who may be plotting against him or who may just be an innocent bystander in Jack's murky drama that, too often seems to be trying to be weird only to establish some sort of strange bona fides.

The motel, for example, is managed by an unkempt and freakish looking man in a wheelchair (Crispin Glover).

Director David Grovic seems to be trying to leaven the proceedings with splashes of humor, but this dreary, derivative thriller can't compensate for Cusack's one-dimensional performance or for a story that gives us almost nothing about which we're able to care.

And the bag trick? We've seen this sort of thing before in Robert Aldrich's 1955 Kiss Me Deadly and in Quentin Tarantino's 1994 Pulp Fiction. Both Adlrich and Tarantino used it to better effect. Here, it's just one more detail in a movie of very little consequence.