Elaine Stritch -- a force of nature 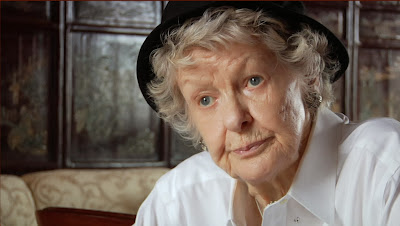 She’s crusty, disturbingly honest and full of irrepressible energy. She’s also 89, and has spent most of her life in show business.

Younger audiences probably know Elaine Stritch as Jack Donaghy’s mother on 30 Rock, but Broadway aficionados are well aware that Stritch has had a long stage career with lots of TV appearances ( Law & Order, The Ellen Burstyn Show, Two's Company, and My Sister Ellen) and a few side trips into movies, including two Woody Allen movies: September and Small Time Crooks).

Her theater credits include a one-woman show Elaine Stritch at Liberty, the original Broadway production of Company and the 1955 production of Bus Stop.

A new documentary, Elaine Stritch: Shoot Me, follows Stritch as she prepares for a final cabaret show in Manhattan. The movie concludes with Stritch's retirement: She recently moved from New York City to her home state of Michigan.

Stritch’s life has not been problem free: She has diabetes and has struggled with alcoholism. But she remains a vital and captivating presence.

In her film, first-time director Chiemi Karasawa, who worked for many years as a producer, gets up close and personal with Stritch. Her documentary revels in Stritch's talent and personality, but doesn’t flinch from showing that growing old isn’t easy — even for Broadway stars.

It's difficult to imagine that anyone could watch this entertaining documentary and not be charmed by Stritch. Trying to ignore her would be like trying to keep your hat on in a wind tunnel.


A FEW WORDS WITH CHIEMI KARASAWA 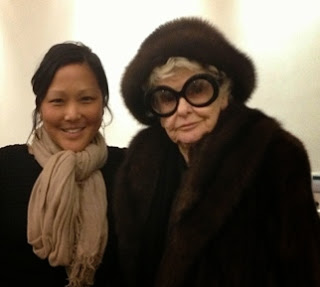 Q. Watching your film, it’s difficult not to think that you might have had a tough time filming someone who’s so strongly opinionated.
A. Initially, it was pretty tricky. It’s tricky for anyone to get used to having a camera around all the time. ... Elaine knows what she likes, and she knows what she feels comfortable doing. Once she began to see the cameraman as a human being, it was like she didn’t care anymore. She wanted the camera around because she wanted us around. That happened in the first couple of weeks.
Q. Over the years, I’ve heard a lot of stories about how films began. But I don’t think I’ve ever heard of a documentary that was born in a hair salon.
A. I was in a hair salon on 57th street. I saw Elaine crossing at the color station. My hairdresser said she was a long-time client. He suggested that I make a documentary about her. I went home, did some research and wondered why I didn’t know more about her.
Q. What would you say is her most essential characteristic?
A. Whenever I’m with her, she’s always the hippest person in the room. I took her to Lincoln Center to see a performance by my composer. As soon as we stopped for a coffee, there was a crowd around her. She’s not a very well known actress, but she always attracts people’s attention. ...
She fell off the truck as a different kind of person. She’s so candid and honest. She does and says what she wants to. ...
To this day, she’s the most unpredictable person I’ve ever met. That’s one of the joys and frustration of dealing with her. It also makes her a fascinating documentary subject.
Q. You began financing your film with a crowd-source campaign. Can you tell us about that?
A. We did an Indiegogo campaign. I raised 40 percent of the money for development that way, and it brought us a lot of attention. But the movie also brought us to the attention of Alec Baldwin. (He plays Stritch's son on 30 Rock and is interviewed in the film.) He asked how much we needed, and helped us to finish the film. He became the film's executive producer and hosted our premiere in New York City.
Q. Do you still see Elaine?
A. Yes. She was just in New York City for the press tour. She moved back to Birmingham, Mich. I’ve probably been to see her four times in the last year. She’s a close person and friend in my life.
Q. Why did she leave New York, a place with which she's so identified?
A. It was becoming increasingly difficult for her to live alone. The cost of living in New York with a full-time care giver was a concern. But she also recognizes that her life is winding down and that she needs to take more time for herself. To her, New York always represented a workplace. Her idea was to be closer to her family. She wanted to reach out to them and live in an environment that was about family than career.
Q. How has she reacted to the film?
A. I showed her a rough cut on a laptop on her bed in the Carlyle Hotel. (Stritch lived there for years.) She was really compelled by it. She watched herself in third person, as if she didn’t know what would happen next.
When I showed it on the screen with a small audience, she was nervous and unsettled. She didn’t know how her fans would take it. Seeing her in a vulnerable state, I had to reassure her that people’s responses were favorable.
But it wasn’t until the premiere at the Tribeca Film Festival that she really believed it. She got an incredible ovation. She was blown away. I think the film shows a triumph of spirit and an incredible survivor’s story. ...
Thankfully, she gave me the honor of making the film I wanted to make. That’s the greatest gift she could have allowed.
Photo of Elaine Stritch and Chiemi Karasawa courtesy of Erick Grau.
Posted by Robert Denerstein at 4:00 PM