A hopless tangle in the West Bank 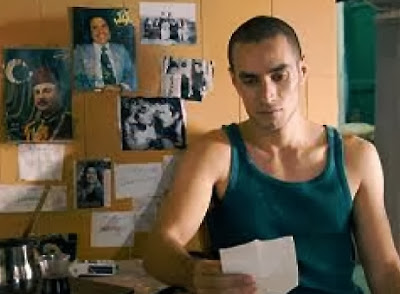 People living in extreme situations deal with complexities that can drive them to the edge of madness. Director Hany Abu-Assad's Omar -- which recently lost Oscar's best foreign-language film race to Italy's The Great Beauty -- does a convincing job of presenting these complexities in a movie that brims with personal betrayals, political protest, violence and suppression -- not to mention the hurts and pleasures of ordinary life.

Moviegoers who remember Abu-Assad's previous two films -- Paradise Now and Rana's Wedding -- know that this Palestinian filmmaker has serious chops. In Omar, he again mingles political observation and high-stakes drama in a story that focuses on Omar (Adam Bakri), a Palestinian baker who's constantly negotiating barriers between Israel and the West Bank.

A pivotal event arrives when Omar joins with a couple of childhood friends to stage a violent assault on Israeli soldiers. Tarak (Iyad Hoorani), Amjad (Samer Bisharat) and Omar mount their three-person assault on an Israeli military outpost, but only Omar is captured.

The Israelis release him when he agrees to help locate Tarak, the group's leader. But will he?

A love triangle further complicates the proceedings. Both Amjad and Omar are taken with Tarek's sister Nadia (Leem Lubany). This conflict echoes throughout the movie, resulting in an emotionally tangled mess in which personal and political issues disastrously overlap.

Abu-Assad spends a fair amount of time developing the relationship between Omar and an Israeli intelligence officer (Waleed Zuaiter). At times, Zuaiter's Rami seems sympathetic to Omar; at other times, he bullies him. It's never entirely clear whether Omar can trust anything that he hears from Rami.

There's enough sincerity in the performances from Abu-Assad's mostly non-professional cast to keep us involved and encourage us to sympathize with Omar's mounting torment. By the movie's end, he's left with no good options.

I didn't find Omar quite as compelling as either Paradise Now (about suicide bombers) or Rana's Wedding (about a young woman's search for her lover in occupied Jerusalem). But the movie definitely adds to the body of Middle Eastern literature that helps us understand why solutions to the Israeli-Palestinian conflict remain so elusive, and why this apparently endless struggle breeds so much sadness.


Posted by Robert Denerstein at 11:10 AM