A TV series becomes a movie. The result is middling. 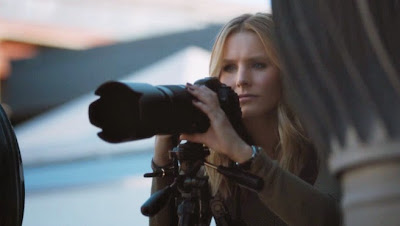 Whether you embrace Veronica Mars, the big-screen adaptation of a popular TV series that ended in 2007, may depend on whether you were a fan of the show to begin with.

At a preview screening, a knowing audience laughed appreciatively when familiar characters made their entrances. I think that's because they knew what these characters were about and didn't need much by way of back-and-fill explanation.

The film, by the way, begins with a short reprise of what happened on the TV series, persumably to allow for a bit of audience expansion.

If you're not a fan of the series, you may find the movie to be flat and unexceptional. If I knew nothing about Veronica Mars, the $5.7 million Kickstarter campaign that brought it into existence, and the obvious devotion of its fans, I would have had trouble understanding why this movie was even made.

Look, a 108-minute feature is not a TV series, and that may be the trouble. A TV series puts the emphasis on characters we get know over time. We live with these characters over entire seasons.

A movie, on the other hand, is a self-contained entity that needs a strong story. Veronica Mars doesn't really have one.

For those who need a quick primer, it's worth pointing out that Veronica (Kristen Bell) started out as a teen sleuth who worked with her private investigator father (Enrico Colantoni) to solve crimes and to penetrate the veil of corruption that surrounds law enforcement in Neptune, Ca., Veronica's fictional hometown.

Throughout three seasons of TV, Veronica displayed a keen gift for mockery and contempt that made her both a participant and a commentator on the show's developments. She could pretty much burst anyone's bubble.

In the movie version, time has marched on, and Veronica just has graduated from law school. She's interviewing with a prestigious New York City firm when she's summoned back to Neptune.

There, she's drawn into the investigation of the murder of a rock star, a young woman with whom Veronica attended high school. Veronica's former boyfriend Logan Echolls (Jason Dohring) -- now a Naval officer -- has been accused of the murder.

In traveling to Neptune, Veronica leaves her current boyfriend Piz (Chris Lowell) behind. Early on, you get the feeling that the Veronica/Piz romance is doomed. Veronica isn't one to be tied down.

At one point, the mystery takes Veronica into Hollywood, where she encounters James Franco, who's playing himself in a cameo that has an unfortunate in-joke quality.

Rob Thomas, who created the TV series, does a good job of keeping some of the high school dynamics alive, working a 10th anniversary class reunion into the proceedings.

And there's no faulting Bell, who maintains the smart, wise-cracking abilities that made Veronica so distinctive.

Usually when I see a movie, I have some idea about its box-office prospects. I have none with Veronica Mars, which will be made available on VOD at the same time as its theatrical release. The movie's success probably depends on how big a fan base it actually has.

I hope those fans find what they're looking for. As for the rest of you? I can't give you many compelling reasons for adding Veronica Mars to your moviegoing vocabulary -- unless it's to catch up on another pop-cultural phenomenon.