Speed? Yes Everything else? No 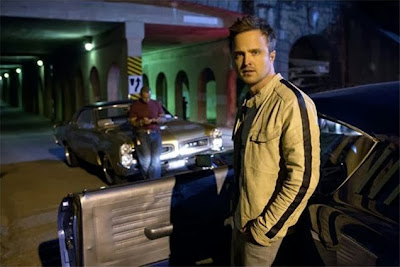 I wasn't going to bother with Need for Speed until I realized the movie starred Aaron Paul, best known as Jesse Pinkman, the young man who made meth on TV's Breaking Bad.

Meth. Speed. I thought maybe Paul had found a new drug on which he could pin his career hopes.

OK, I'm kidding. I knew that Need for Speed was developed from a popular Electronic Arts video game, but I'm not kidding about Paul. I wanted to see what he could do on the big screen.

The answer: If Need for Speed is any indication (and I hope it isn't), not much.

Paul plays Tobey Marshall, a blue-collar guy from Mt. Kisco, New York. Thanks to a few contrivances Tobey joins with Julia (Imogen Poots) on a cross-country trip. The goal is for Tobey to reach San Fancisco so that he can compete in a high stakes race sponsored by a former racer named Monarch (Michael Keaton).

Guess what? It's not all about racing. Tobey wants to defeat his arch rival Dino (Dominic Cooper), the immoral rich guy responsible for the death of Tobey's best bud (Harrison Gilbertson).

Dino forces Gilbertson's Pete into a lethal crash during an early-picture race, but the wrongly accused Tobey spends two years in jail for the crime.

When Finn leaves his day job, the movie adds some gratuitious nudity to the proceedings. Eager to rejoin his racing pals, Finn shocks his office mates by stripping off his clothes, baring his butt and returning to the world of vroom-and-zoom.

En route to San Francisco, Tobey and Julia are chased by cops and by other enemies who want to stop them.

And just in case you don't think cars are enough, the directors add a Cessna that serves as a traffic reporter for the speeding Tobey and, later, a couple of helicopters.

The action (yes, there's plenty) sometimes seems more like vehicular homicide than racing with overturned cars and fiery crashes that look as if no one possibly could survive them.

Nothing makes a great deal of sense here, and as shocking as it is to say, the movie makes the Fast & Furious films -- at least the better ones -- look like masterpieces.

Based on his work in Breaking Bad, I'm thinking there's more to Paul than Need for Speed allows him show. I hope I'm right.


Posted by Robert Denerstein at 4:45 PM