A documentary about Molly Ivins

Columnist Molly Ivins had a big career and a personality to match. 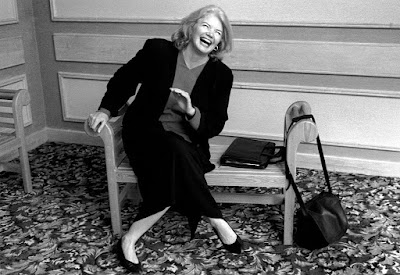 I didn’t know the late Molly Ivins personally, but I met her a couple of times, once in the newsroom of the Rocky Mountain News and once on a hilltop near Taos. At the time, Ivins was covering the West for The New York Times. As was often the case with journalists who landed regional assignments, Ivins occasionally dropped into the News to commandeer a desk, write and talk to reporters.

When Ivins was around the newsroom, you couldn’t miss her. She was big-boned, tall and imposing without being intimidating, what you might call a woman with a major personality.

In 1980, I attended an event called the D.H. Lawrence Festival. It was one of those once-in-a-lifetime, irresistible cultural eruptions that any reporter would have killed to cover: An inharmonious blend of experts, celebrities and Lawrence enthusiasts who invaded Santa Fe for several days.

Academics delivered papers, poets read poems and those of us who were privileged to be there were exposed to a range of names that could wear-out a bold-faced font. From literary critic Leslie Fiedler to mega-star Elizabeth Taylor to poet Allen Ginsberg, it seemed everyone showed up. That's not to say that anyone really grasped exactly what the event signified -- other than a chance to mark the 50th anniversary of Lawrence's death and to remember the author in his adopted New Mexican setting.

Ivins, of course, was there, and, on a sunny afternoon, I found myself standing next to her at a ceremonial event that took place at the D.H. Lawrence ranch. It's all a bit fuzzy now, but I remember young women -- clad in white and portraying vestal virgins -- tossing flower petals to each side of a path as they approached the Lawrence Memorial chapel.

We were in the days before reporters traveled with computers. There was no tweeting or bleating taking place as events unfolded. We were expected to watch or, to put it in more high falutin' terms, to observe. In those days, writing kept a respectful distance from reporting until the point when deadlines intruded.

As the strange ceremony unfolded, Ivins — speaking in what I presume was an uncharacteristically low voice — began describing it. She offered a running account and she did it with style, grace, and an enviable amount of humor. I later came to think that she was writing her story out loud as this odd bit of theater unfolded. I'd bet she remembered it when she got back to a typewriter.

Although I can’t recall precisely what Ivins said, I knew I was watching a big-time talent reveal itself.

If you want to know what kind of woman Ivins was — and you should — you’d do well to spend some time with the documentary Raise Hell:: The Life and Times of Molly Ivins. Directed by Janice Engel, Raise Hell moves quickly, offering interviews with Ivins, as well as excerpts from public addresses she gave.

Fellow Texan Dan Rather adds a note of seriousness and other talking heads talk, helping to put Ivins’s personal and journalistic lives into context.

Watching Raising Hell, it's difficult not to wish that Ivins had lived well beyond 2007. She died of cancer at the age of 63, drastically depleting the national supply of irreverence that she sometimes served with a side order of bile.

For much of her life, Ivins was a hard-drinking, pickup-driving woman who, by not taking politicians seriously, managed to write seriously and engagingly about the political scene. Ivins famously referred to Geroge W. Bush — the younger and many would say "lesser" of the two Bush presidents — as “Shrub."

When she returned to Texas, she found her best subject. Ivins and the Texas legislature were made for each other, as were some of the state’s upper-echelon politicians. She was a whip-smart woman with a generous appreciation for elected officials who sometimes said and did things that were dumber than dirt.

She could spit in their eyes and get a chuckle out of them at the same time -- or so goes the mythology. Whether she left politicians laughing or not, Ivins remained an invaluable voice until the end of her life.

As I said, you had to take notice.