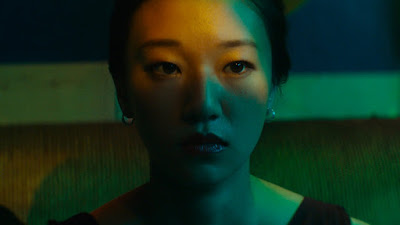 Director Justin Chon tackles cultural dislocation in Ms. Purple, the story of Kasie (Tiffany Chu), a young woman trapped in a life that revolves around men, notably her dying, comatose father and the abusive, demanding customers at the karaoke bar where she works. An affluent boyfriend (Tony Kim) -- also a karaoke bar patron -- gives Kasie money but treats her like a pet. Kasie lives a life of desperation in Los Angeles's Koreatown. Her mother long ago left to pursue a more affluent life. Kasie grew up with an immigrant father who called her a princess but did little to prepare her for adulthood in America. Now in a coma, Dad (James Kang) requires so much care that Kasie must call on her wayward brother Carey (Teddy Lee) for help. Flashbacks tell us that Carey's difficult relationship with his father explains, at least partially, why the young man remains shiftless and unemployed. At times, Carey pushes his father's bed -- with dad in it -- through the neighborhood, an act that's both amusing and hostile. Who does that to an unconscious man? Ms. Purple draws us into the multi-cultural environment of LA, sometimes using Mexican music in the background. Chon also introduces an under-developed Mexican-American character (Octavio Pizano). A guy who parks cars for a living, Pizano's character takes a liking to Kasie and invites her to his sister's quinceanera. Perhaps Chu wants to contrast a more rooted part of LA's diverse population with the more unsettled Korean enclave he depicts. Chon gets a lot out of his cast and he deglamorizes life among a segment of LA's Korean population. The story of second-generation alienation and exploitation can seem disjointed, but amid the chaos of Kasie’s life, Chon finds enough heartbreak to make his movie stick with you.