Peter Sarsgaard headlines a story about a man who's obsessed with sound. 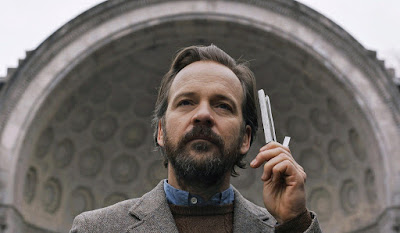 I’ve always been interested in obsessive characters who operate within a narrow range of behavior. In The Sound of Silence, we find one such character, a New York City man who calls himself a house tuner. Peter Lucien (Peter Sarsgaard) examines homes and tries to find the noise responsible for debilitations such as insomnia and depression.

A good night’s sleep might depend on something as simple as junking an old toaster and purchasing a newer model.

When he's not working with clients, Peter embarks on a far more ambitious project. Armed with tuning forks, he travels around the city to create a sound map. He's obsessed with searching for patterns. He's looking to see how sound shapes the lives of residents of a particular area.

Contrary to what you might expect, there’s nothing obviously freakish about Peter. He dresses neatly, treats his clients with respect and seems devoted to helping people.

Does she want something more from him? If so, is Peter capable of giving her more or is he too wrapped up in his pursuit of sonic revelations?

Tyburski widens the movie’s scope with other developments: At one point, Peter is courted by a tech firm that tries to convince people it can help bring harmony to their lives. He also struggles to find acceptance in the academic world, where he hopes the purity of his ambitions will earn him respect.

Despite a smart start, Tyburski and screenwriter Ben Nabors aren’t able to develop their movie into something rich and satisfying. Like the sound of the tuning forks Peter uses, the drama in The Sound of Silence starts strong and then fades out.