Zellweger does justice to ‘Judy’ 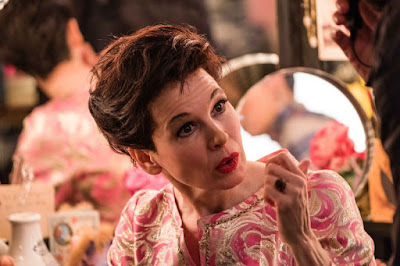 Judy, a drama about the final months of Judy Garland's all-too-brief life, turns the iconic entertainer into a kind of prisoner of her pubic image. Garland's life fell prey to studio tyrants, drugs, bad marriages, and her own need to connect with audiences. Judy already is being hailed as an Oscar showcase for a transformed Renee Zellweger. Fair enough. Judy derives most of its power from Zellweger's performance.

Based on End of the Rainbow, a musical play by Peter Quilter, Judy survives a series of sometimes wooden flashbacks and an overly familiar story arc to reach an emotional conclusion that pays tribute to Garland's enormous capacity to entertain while recognizing the deep sadness that could pervade her life.

I don't think it qualifies as a spoiler to tell you that the movie's finale involves a deeply felt rendition of Garland's signature tune, Over the Rainbow. If you don't see that coming when the movie enters its third -- and best act -- you probably need to see more movies.

Set mostly in 1968, the story places Garland in a swirl of trouble, notably a battle with former husband Sid Luft (Rufus Sewell) over custody of their two children. Garland loved her kids but she couldn't give them the stability they needed.

Problems constantly threat to drag Garland down. Broke and hardly in demand, Garland takes a job in London to play the Talk of the Town nightclub. Not surprisingly, her appearance is marked by difficulties: She refuses to rehearse; she drinks too much; she can't sleep; she barely makes it to performances on time, and in the middle of all that, she decides to marry Mickey Deans (Finn Wittrock), her fifth and last husband.

It's obvious to us, if not to the love-starved Garland, that the marriage will be brief and bad.

In London, Rosalyn Wilder (Jessie Buckley) receives a tough assignment; she's supposed to look after Garland, who misses few opportunities to test Rosalyn's ample patience. As the impresario who brings Garland to London, Michael Gambon is given little to do aside from looking dyspeptic and skeptical. Underutilizing Gambon must always be regarded as a mistake.

In the flashbacks to her MGM days and The Wizard of Oz, Garland (Darci Shaw) finds herself in painful encounters with the tyrannical Louis B. Mayer (Richard Cordery), the mogul who controlled her with threats and humiliation. Garland eventually claimed that Mayer groped her, as well, something the movie hints at.

An effort to acknowledge Garland's importance in gay culture feels both necessary and yet forced. Andy Nyman and Daniel Cerqueira play a gay couple who meet Garland when she's leaving Talk of the Town after a performance. They wind up taking her to their apartment. She's lonely and their company proves welcome.

The two fans also figure in the movie's appropriately sentimental ending, which suggests that the only true love Garland ever experienced (aside from that of her children) was given by audiences.

Aided by prosthetics including a false nose, Zellweger's performance gathers the necessary force. A collection of tics, outbursts, displays of sincerity and vulnerability create a character who spent a lifetime taking morning pick-me-up drugs that she would counter with late-night sleeping pills.

Director Rupert Goold makes the most of Zellweger's transformation and the movie also benefits from the fact that Zellweger does her own singing. She's not Garland, but Zellweger works hard to sell Garland numbers such as Get Happy and puts brassy, entertaining showmanship into the musical numbers that she performs.

Maybe this small and sometimes limited movie was inevitable. The figure of Garland was destined to dwarf any story about her and that happens here. Judy stands as a portrait of Garland at the end of a rainbow, one in which the promised pot of gold wound up being empty. You wonder whether the woman who had played Dorothy Gale, a character who awakened the dreams of so many, had lost the capacity to wish for herself.