The story of a much-loved musical

Fiddler: A Miracle of Miracles traces the history of a play that has become enormously popular. 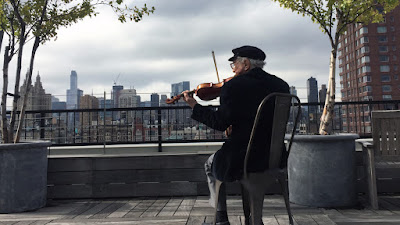 Fiddler on the Roof, a musical of enormous popularity, made its Broadway debut 55 years ago with Zero Mostel in the lead role of Tevye. By now, most musical fans know that Tevye earned his living as a dairy man who spent his days talking to God and wishing he weren't poor. Tevye also had six daughters with minds of their own.

Happily, Fiddler: A Miracle of Miracles -- a documentary about the origins and continued life of a play that has been staged throughout the world -- acknowledges that the show has meaning beyond nostalgia or romanticized views of shtetl life.

Made into a musical by composer Jerry Bock and lyricist Sheldon Harnick, Fiddler retains some of the pathos found in the work of the great Yiddish writer, Sholem Aleichem, who wrote the Tevye stories. Aleichem illuminated the lives of Eastern European Jews in a fast-changing world that, unbeknownst to them, was on the brink of Holocaust extinction.

But the documentary's explanation of Fiddler’s popularity turns out to be overly broad, a celebration of the universality of Fiddler's themes, notably the clash between established tradition and creeping modernity.

But, at least as I see it, Aleichem’s genius involved finding universality in the particular. After all, Aleichem wrote in Yiddish, a language that never was widely spoken or read outside Jewish communities. (A Yiddish-language production of Fiddler currently is being staged in New York.) Aleichem captured the idiosyncratic flavors of the Yiddish-speaking world. Without that, there are no noodles in the story's universal soup.

Of course, the themes of parenting, poverty, and anti-semitism have wide resonance, but, in Aleichem's work, they’re irrevocably rooted in the Jewish world. I’m still working out how I feel about what I viewed as the documentary’s over-emphasis on universality, but that doesn’t mean that I didn’t enjoy it.

Director Max Lewkowicz notes that the show wasn’t particularly well-received when it opened. Despite a lukewarm NY Times review, lines formed. Fiddler became a monster hit and later, a 1971 movie directed by Norman Jewison, who, name aside, is not Jewish.

The movie’s star — Israeli actor Topol — now 83 — talks insightfully about playing Tevye and we hear from many other actors who have appeared in Fiddler over the years.

A variety of other personalities emerge, most notably the brilliant choreographer Jerome Robbins, who brought an authoritarian approach to his direction of the stage production but remained widely admired by those he tyrannized.

Among the film’s more interesting wrinkles are glimpses of productions of Fiddler from around the world. Interestingly, all of these productions — in costume and ambiance — honor the particularity of Fiddler in ways that the film might have spent more time exploring.

Entertaining, informative and sure to please the legions who love the show, Miracle of Miracles makes one thing clear. To borrow (and distort) a line from one of the play’s many memorable songs: The sun that rose on Fiddler likely never will set.

Email ThisBlogThis!Share to TwitterShare to FacebookShare to Pinterest
Labels: Fiddler on the Roof, Fiddler: A Miracle of Miracles, Max Lewkowicz, Topol, Zero Mostel