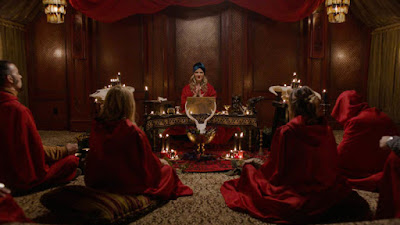 I'm never sure whether films have real-world impact, but if Satanic Panic does alter anyone's behavior, it probably will be America's legion of pizza delivery people. In this case, a pizza delivery girl (Hayley Griffith) makes a delivery to a wealthy area that's way out of her normal zone. When the recipient disappears after refusing to tip, she bangs on the door, hoping to shame the stony-faced jerk who stiffed her. Our heroine might normally have gone on her way, but her moped’s nearly out-of-gas and she's afraid she won't make it home. Entering the house through a conveniently open side door, the pizza girl quickly becomes ensnared in a meeting of devil worshipers who want to turn her into a human sacrifice. Purposely overstated performances, particularly by the group's head witch (Rebecca Romijn) seem intended to give a comic spin to the proceedings, but this kind of acting also can create an amateurish feeling that may not have been what director Chelsea Stardust hoped to achieve. Gore gluttons will find enough plasma to satisfy, but too much of the movie simply doesn't work, either as straight-ahead horror or macabre comedy. Ruby Modine supplies a witty spark that's otherwise missing from a movie that aims to produce crowd-pleasing moments for horror buffs who are well enough versed in genre tropes to recognize when the movie is poking fun at them. All else aside, it may be reassuring to know that even Satanists are sensible enough to crave pizza, thus prompting the movie's most intriguing aside: Ritual sacrifices of young virgins never should be performed on an empty stomach. 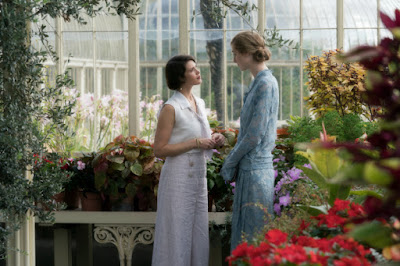 Vita & Virginia, a well-appointed look at the lesbian relationship between Vita Sackville-West (Gemma Arterton) and Virginia Woolf (Elizabeth Debicki), too often fails to break its period-piece shackles. The Bloomsbury scene depicted by director Chanya Button doesn't prove interesting or eccentric enough to shock us with its rejection of bourgeois convention. Both Vita and Virginia are married, Vita to a husband (Darren Dixon) who indulges his own same-sex interests but fears that his boldly flirtatious wife will jeopardize his public standing. Virginia's husband Leonard (Peter Ferdinando) shows more tolerance for his wife's inclinations. He publishes her books, loves her and even believes that she might benefit from a fling with Sackville-West. Isabella Rossellini shows up as Lady Sackville, a woman who clearly disapproves of Vita's undisguised recklessness. Arterton approaches her role with crisply delivered openness; Debicki's Virginia seems depressed and dreary, perhaps to suggest the despair that ultimately led Woolf to suicide. There's nothing wrong with Vita & Virginia that more unruliness wouldn't have cured. But Vita & Virginia seems too intent on becoming a movie of certifiable cultural significance to feel as if it's full of new insights.