If you watch a lot of movies, your consciousness often inevitably fragments to the breaking point. It’s possible, in the span of two films, to go from the generally overlooked world of fungi (yes, you read that right) to the massively over-observed (at least in movies) world of cocaine smuggling. I’m talking about Louie Schwartzberg’s documentary Fantastic Fungi and director Jason Cabell’s Running With The Devil, films that have no business being mentioned in the same breath, which is why I couldn't resist putting them together.

Let’s start with the healthy side of the ledger and a confession. What I know about mushrooms (magic or otherwise) is precisely nothing -- and, at the moment, I'm not especially fond of them. Mushrooms have mounted a late-summer invasion of my lawn, and some of them are not pleasing to the eye, protruding from the earth in a form that resembles a rotting phallus. 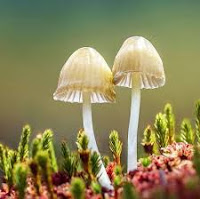 Of course, I’m not giving mushrooms their due -- as those who spend their time studying them, appreciating them and sometimes eating them would attest.

Narrated by Brie Larson (who occasionally speaks for the usually silent mushrooms), Fantastic Fungi includes commentary from authors such as Michael Pollan and Andrew Weil. It also focuses on the work of Paul Stamets, a mycologist who has made mushrooms his life and who runs a business cultivating, finding and selling all manner of mushrooms, which evidently come in an astonishing variety, 1.5 million species worth. Judging by the movie, it might be wise to think of Stamets as a human ambassador to the fungi world.

The movie is designed to provide information about the essential role that mycelium, part of a fungus, plays in keeping the planet balanced. Mycelium helps the earth digest decaying, carbon-based matter, keeping the earth’s life cycle — birth/decay/death/more birth —- humming.

Schwartzberg offers time-lapse views of mushroom growth and introduces us to the staggering array of mushrooms that grow in the earth’s forests. He also includes commentary from psychologists who suggest that ingesting certain kinds of mushrooms in controlled dosages can play an important role in coping with depression and dealing with other psychiatric issues.

In short, we may not be paying enough attention to the psilocybin mushroom, which can take us on a trip without having to go through airport security. The documentary shows psilocybin being taken in pill form under supervised conditions.

A bit of a commercial for mushrooms, Fantastic Fungi nonetheless should please those who ascribe to the idea, as the film does, that nature is intelligent.

Now, for a different drug:

In the age of opioids, a movie about the cocaine trade immediately and perhaps inevitably feels passe.

Running With the Devil functions as a kind of primer about how cocaine moves from Columbia to the US market, increasing in price with each step of its illicit journey. A strong cast — led by Nicolas Cage and Laurence Fishburne — can’t do much to elevate a by-the-numbers movie steeped in the violence and debauchery surrounding the drug trade.

The characters who populate Running With the Devil all have generic names. Cage, for example, portrays The Cook, a pizza chef who supplements his income in the cocaine trade -- or maybe it's the other way around. Fishburne portrays a character called The Man, an ambitious participant in the trade who’s gotten too deeply involved in sampling the merchandise and cavorting with hookers. Barry Pepper plays The Boss, a character who needs no further explanation. Cole Hauser appears as The Executioner. Can you guess his occupation? I thought you might.

The movie eventually finds Cage and Fishburne hiking through the North American wilderness en route to their final destination.

A mostly male production, Running With the Devil does include one major female character. Leslie Bibb portrays the DEA agent who’s trying to stop the drug trade.

With big money involved betrayals can’t be far behind and the screenplay, also by Cabell, has them.

Hints of Tarantino blow through a story which includes a surprise ending that you should see coming. Looking bookish and scholarly, Cage puts on an all-business front, with traces of madness, of course. His performance contrasts to Fishburne’s display of wanton carelessness.

I can't recall seeing Fishburne play a character such as this, but Running With the Devil stumbles as it laboriously works its way through the familiar piles of white-powder crime.