Brad Pitt travels deep into space -- both inner and outer. 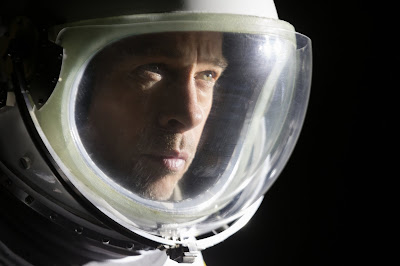 Director James Gray's Ad Astra qualifies as a true oddity, a movie that manages to be both interesting and not entirely successful at the same time. Gray, who has made movies such as The Lost City of Z, Little Odessa and We Own the Night, this time dreams really big, setting his story amid the deep emptiness of space.

As astronaut Roy McBride, Brad Pitt takes a journey to Neptune where he must, roughly in this order, find the father who left him so that he could galavant around the galaxy, stop a powerful electric surge that has sent lethal shock waves to Earth, and, perhaps most importantly, commune with his emotionally wounded inner self so that he might finally be able to connect with someone else.

Pitt provides an offscreen narration in which he reveals Roy's thoughts, which come across as a dissertation on isolation; Roy tells us he's cut off from everyone. He does, however, sometimes confide with an unseen psychologist (an off-screen voice) who conducts a series of psychological evaluations. Roy generally passes -- although you might be tempted to think his answers feel a little too practiced, the speech of someone who's unable to connect his emotions to his thoughts.

The best parts of Ad Astra involve the set pieces that Gray stages with excitement and surprise: These include Roy's free-fall from an antenna that has been constructed at the atmosphere's outer limits, a chase sequence involving rovers on the surface of the moon, and a mission in which Roy and a colleague answer a distress call from a crippled vehicle.

En route to Neptune, Roy makes stops on the moon and on Mars. On Mars, he learns more about his father's fate from Helen Lantos (Ruth Negga), the woman who manages the space outpost.

Along the way, Gray offers commentary on the commercialism of humanity's great adventure. The moon, for example, boasts a dreary mall. No wonder Roy's outlook feels mired in futility: He does his duty; he's calm; his pulse never rises above 80 beats per minute; he screws up relationships; he makes mistakes; he's miserable.

Liv Tyler, who I believe never speaks, is used to suggest Roy's failures with women, but she's more like a vapor than a physical presence in the movie.

You should know that Roy's father -- presumed dead for years but possibly still alive on a spacecraft that floats above Neptune -- is played by Tommy Lee Jones, a bit of casting that tells us that Roy's journey to find his rogue dad needs a lalapalooza of a payoff. It's the dynamic Francis Ford Coppola set up in Apocalypse Now when he sent Martin Sheen up a river in search of Captain Kurtz.

It takes guts for a filmmaker to give his film such singular focus; we're being set up to be blown away should Roy and his father ever meet. If we're not ... well ... let's just say, it's not a good thing.

I'm simplifying Roy's story for the sake of brevity, but -- in the end -- it doesn't prove especially complex. The movie's message (it has one) puts an aphoristic gloss on its promise of something vast, cosmic and mysteriously profound. We're set up to expect Kubrick and Gray gives us daddy issues.

Still, I found myself breathing the thin air Gray creates and moving along with a movie that takes us on a trip that's weirdly arresting -- at least most of the time. Hey, as we're always being told; it's not the destination but the journey that matters.

Gray splays Roy's inner voyage across vast spaces, turning his movie into a metaphor with mythic and psychological overtones centering on absentee fathers (take that where you will) and what it means to be a man. You'll have lots of opportunities to study Pitt's face, as Roy burrows deep into his own psyche. Pitt pulls it off.

I can't say too much more without spoilers, but it's possible that Gray may have made a space adventure that can be read as a critique of every other space adventure, as well as of our desire to watch them. This is either brave or a little crazy -- or some mixture of both.

All I can say is that when I emerged from the auditorium where I saw Ad Astra, the lights in the corridor seemed to emit an eerie glow. Ad Astra teeters on the brink of something awe-inspiring without quite falling over. Can a movie be "nearly" visionary?


Posted by Robert Denerstein at 10:35 AM