Two Alabama dimwits find themselves at the center of a comedy with a very weird twist. 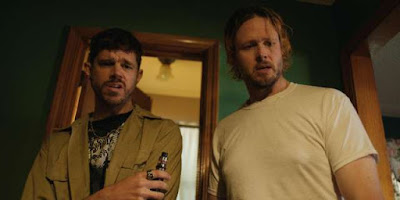 Three Alabama dimwits are supposed to be rehearsing with their band, the oddly named Pink Freud. The rehearsal might be an occasion for the men to drink and smoke pot, but there's something more afoot. These good ole boys decide that it's time to "get weird."

It takes quite a while to learn what director Daniel Scheinert means by getting weird and when you find out, you may greet the newly acquired knowledge with a mixture of revulsion and disbelief.

But I'm getting ahead of myself.

The Death of Dick Long serves up a low-life comedy about backward folks who reside in a small Alabama town.

As a result of that night of partying, one of them turns up dead, even though his buddies dump him (literally) at the doorstep of the local hospital. One the man's surviving pals is Zeke (Michael Abbott Jr.), a shaggy looking fellow with a wife and a daughter.

Zeke's running buddy Earl (Andre Hyland) seems detached from most everything, greeting just about any situation with a shrug as he vapes and blows out thick clouds of smoke. Perhaps intentionally, Zeke sports a haircut that evokes memories of Jim Carrey in Dumb and Dumber.

Scheinert treats the residents of this small town in a relaxed manner that allows them to make fun of themselves as the hapless Zeke and Earl try to cover their tracks to avoid being accused of murdering their friend.

But wait. A physician at the local hospital (Roy wood Jr.) has discovered something odd: The deceased man (Dick Long of the title) died from rectal hemorrhaging. Weirdness looms.

As his life falls apart, an increasingly nervous Zeke tries to deal with his wife (Virginia Newcomb), making up stories to ward off her suspicions.

At the same time, the local police chief (Janelle Cochrane) and her deputy (Sarah Baker) enter the story. They want to find out what happened to poor Dick Long.

No fair saying more, but know that the movie's big reveal is so off-putting and bizarre it challenges an audience to stay with these benighted characters as Scheinert begins to introduce a few serious touches to an otherwise wacky concoction that provides laughs while its characters squirm.

Abbott and Hyland make a good comic duo, but The Death of Dick Long eventually becomes a kind of kinky version of Dumb and Dumber. There are chuckles along the way but it's difficult not to wonder whether Scheinert wasn't trying too hard to sing in the weirdest possible key. The movie's big twist really is twisted.