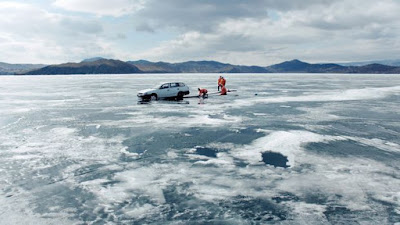 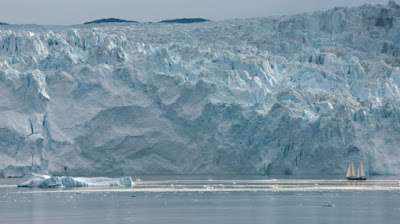 The movie's title might suggest an animated feature about some winsome Disney sea nymph, but Aquarela is anything but. Russian director Victor Kossakovsky has made a mesmerizing documentary about the power of water and his movie brims with "wow" moments. To create an atmosphere conducive to awe, Kossakovsky eliminates narration and explanation. He decontextualizes his imagery in ways that make us feel as if we're seeing anew. Kossakovsky doesn’t even tell us where on the globe we are, although we can guess. (Russia, Miami, and Venezuela, for example). Aquarela asks an audience to believe that potent images create their own message. Still, it's probably safe to say that Kossakovsky wants us to consider the devastating impact humans have had on the natural environment. In an opening sequence, men work on a thin sheet of ice located off a grim-looking coastline. As the movie unfolds, we’ll see (and hear) giant chunks of ice breaking from glaciers, rising and falling like monsters that have emerged from depths we know nothing about. Watching a couple navigating rough waters in a sailboat proves as harrowing and gripping as any action sequence you've seen. Kossakovsky marries natural sound with occasional infusions of discordant music that augments the sense that he's in tune with forces beyond our control. When Aquarela moves from frozen waters to a tropical setting, the movie makes a tonal shift that's initially jarring, but Kossakovsky recovers and we begin to understand that he’s water shows its power regardless of setting. Aquarela ends somewhat abruptly, but the movie contains some of the year’s most arresting sights; it stands as a towering tribute to Kossakovsky's eye, to the bravery of the camera operators who shot it and, most importantly, to the power of water and to the ocean home from which life emerged and which now may be roiling at our disrespect for its authority.