A whistleblower tries to stop the Iraq war 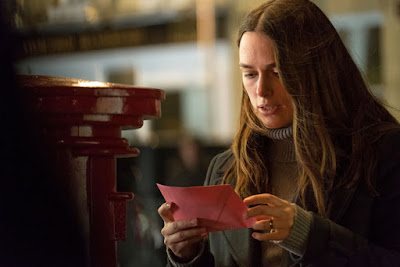 In 2003, Katherine Gun did her best to stop Britain from entering the Iraq war. As a British intelligence employee with a specialty in translation, Gun violated the country's Secrets Act so that she could reveal a controversial email. The email instructed those working at Britain's Government Communications Headquarters (GCHQ) to look for information that could be used to pressure U.N. Security Council members to vote for a resolution authorizing the war.

Although Gun's leaked email was published by The Observer, it obviously didn't stop British participation in a war that was being carefully engineered and for which the "intelligence'' books were being cooked.

Directed by Gavin Hood (Eye in the Sky) and starring Keira Knightley, Official Secrets tells Gun's story in straightforward fashion, taking us inside a whistleblower's anxiety-riddled world. Things don't go smoothly for Gun, who eventually was put on trial for violating the Official Secrets Act of 1989.

Knightley and Hood don't add much by way of over-dramatized flourish to the portrayal of Gun, a woman who lived with her Muslim husband (Adam Bakri) in London. After making her momentous decision, Gun tormented herself. Would she get caught? Had she done the right thing?

Written by Sara and Gregory Bernstein, Official Secrets boasts a strong supporting cast. Matt Smith appears as Observer reporter Martin Bright, the journalist who fights to publish the explosive email. Matthew Goode portrays one of Bright's colleagues and Rhys Ifans signs on as the Observer's wild-eyed U.S. correspondent, a reporter who works hard to confirm the authenticity of the email Gun leaked.

Conleth Hill portrays the editor who struggles about publishing a story that could derail a war effort his paper previously supported. Late in the movie, an understated (what else?) Ralph Fiennes shows up as Ben Emmerson, the barrister who defends Katharine.

Official Secrets doesn't always make for rousing cinema but it serves as an important reminder of what can happen to those who realize that secret government objectives sometimes should be subordinated to higher values, one of them being the truth.