'The Goldfinch': a lengthy letdown 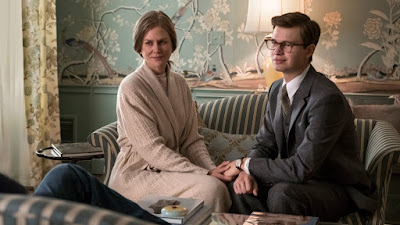 Many years ago, Bob Rafelson, the writer-director of movies such as Five Easy Pieces, The King of Marvin Gardens and Blood and Wine, told me something I've never forgotten. In an interview, Rafelson said that the best approach for screenwriters who adapt novels is to concentrate on what he or she most loves about the book and jettison everything else.

As is often the case with sage advice, Rafelson's mostly goes unheeded. If you're looking for evidence, search no further than The Goldfinch, the big-screen adaptation of a Pulitzer Prize-winning 2013 novel by Donna Tartt.

Beautifully shot by cinematographer Roger Deakins and mounted with a clear respect for nearly all other aspects of cinema craft, The Goldfinch nonetheless connects only intermittently. It's possible that director John Crowley and screenwriter Peter Straughan had too much respect for the material. Their movie plays like a dutifully illustrated version of Tartt's novel, a two-hour and 29-minute work that has the look of a prestige offering with built-in Oscar glow that the story never really matches.

The movie's pivotal event occurs when young Theodore Decker (Oakes Fegley) visits the Metropolitan Museum of Art with his mother. As luck would have it, Theodore and his mom happen to be at the museum when it's struck by terrorist bombs. Mom dies, Theodore's odyssey begins, and the source of the story's title is revealed.

Theodore leaves the museum with a small 17th-century painting by Dutch artist Carel Fabritius, a student of Rembrandt. The painting depicts a pet goldfinch that has been chained to its perch. Ironically -- with a capital "I" -- Fabritius perished in an explosion.

The painting becomes the movie's McGuffin, a literary conceit that pushes Theodore into a world that's not always kind to him and which some reviewers of the novel aptly called Dickensian.

The movie contains a ton of plot and many characters. These include the Babours (Nicole Kidman and Boyd Gaines), the Park Avenue couple who take the newly motherless Theodore underwing until the boy's wayward father (Luke Wilson) and his trashy girlfriend (Sarah Paulson) turn up. They drag the boy off to Las Vegas.

In Las Vegas, Theodore meets Boris (Finn Wolfhard), an abused wild child who becomes his only friend and who also introduces him to alcohol and drugs.

Flashbacks to the fateful explosion gradually reveal precisely what happened on the day of the attack, but these hazy backward glances begin to feel tiresome. Crowley also alternates scenes of Theodore as a child with scenes in which Theodore has become a young man played by Ansel Elgort. Boris also crops up as an adult, portrayed by Aneurin Barnard.

Two potential love interests for Theodore also are included: Pippa (Ashleigh Cummings) was in the museum on the day the bombs went off and seems his obvious soulmate. In his early adulthood, Theodore becomes engaged to the Barbours' daughter (Willa Fitzgerald).

Jeffrey Wright gives the movie's most memorable performance as Hobie, an antique dealer who becomes Theodore's mentor. Hobie delivers the speech that announces the movie's theme, a reverence for the immortality of art as contrasted with the fragile mortality of those who create, save and respect it -- and, of course, the rejection of anything that might be considered fake.

Not all the performances come into sharp focus: Kidman portrays a decorous, emotionally reserved woman who also seems to have a genuine affection for Theodore. Wolfhard's Boris enters the movie with the force of a tossed grenade; it's as if he has been added to enliven the proceedings. Fegley's young Theodore can be impish, wounded or rebellious.

And Elgort's tormented and guilt-ridden character (he blames himself for his mother's death) isn't as interesting as his childhood version.

So what to make of all this? Good question and one that the movie's arduous length allows ample time to consider, even when the pace picks up in a third act that's overburdened with thriller-like plot developtments revolving around the painting.

Watchable without being compelling, The Goldfinch leaves us to ponder what this movie, at its deepest level, is all about. If you can't answer that question, you may be forced to consider a sobering possibility: Perhaps that deepest level wasn't reached.