Brittany runs, but there’s a bit more to it 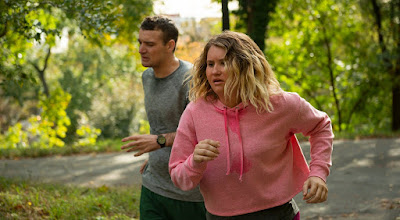 Some weeks before I saw it, I recall reading that Brittany Runs a Marathon might be the sleeper hit of summer. Well, we’re on the cusp of fall and the movie is just now making its way around the country and I have no idea whether it will be a breakthrough hit.

Still, Brittany has plenty to recommend it. Not the least of the movie’s triumphs revolves around the performance of Jillian Bell, who plays the title character, a 27-year-old overweight New York woman whose doctor tells her that it’s time to shed 50 pounds. Her excesses -- food, alcohol, and hard-partying -- have put her on an early death track.

Initially resistant, the dissolute Brittany decides to become a runner. Given Brittany’s penchant for excess, it's not surprising that she becomes an addicted runner who plans to enter the grueling New York City marathon. She begins to lose weight.

Writer/director Paul Downs Collaizo primes the audience for a feel-good comedy about an acerbic, frequently dislikable woman, who changes her life so that she can become a beacon of self-transformation.

Thankfully, Collaizo follows a slightly different path. A complex character, Brittany takes herself and her running seriously but not everyone else does. As her roommate (Alice Lee) discovers, the reformed Brittany isn’t nearly as much fun as she was when she was drinking, staying out all night, and strafing others with sarcasm.

After Brittany gets crosswise with her roommate, she lands a job at an upscale Manhattan home, where she’s supposed to look after the vacationing owners’ dog. Lacking a place to stay, Brittany moves in and meets Jern (Utkarsh Ambudkar), an unashamed slacker who has taken the same house-minding job. He uses the home as his personal squat.

Brittany also acquires a support system for her running, notably a former neighbor (Michaela Watkins), a photographer who’s going through a tough divorce. Watkins character flirts with cliche, reminding us —- in case we didn’t already know — that a person’s surface seldom tells the whole story. Apparently, people who seem healthy and well-adjusted have problems, too.

Bell can be funny and, in the movie’s final going, really annoying. That's because Brittany doesn’t deal with all the obstacles she faces with humility and grace. A scene in which she confronts and insults a heavy woman taps a little too deeply into Brittany's sour side.

Collaizo can't quite accommodate all the movie's tonal shifts (from hip comedy to serious drama) but he should be credited with trying to add some nuance to what could have been high-concept formula job: overweight woman sheds pounds, gain self-confidence and becomes a better person.

As it turns out, Brittany's greatest victory involves her realization that her weight and her capacity to love and be loved aren’t irrevocably linked. Fair enough, but I wondered whether such a conclusion might be a little too pat for a character who's smart and tough enough not to care whether her story has a spirit-lifting message.