Flashy surfaces and energized performances keep this look at pole dancers on track — but it’s a narrow track. 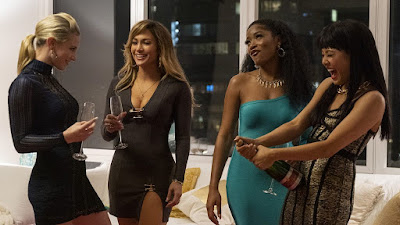 Jennifer Lopez headlines Hustlers, an inside look at the world of pole dancers — in this case, pole dancers who scam Wall Street hotshots who wantonly spend money on booze, ego-indulgence and lap dances.

Director Lorene Scafaria (The Meddler) includes enough pole dancing and body exposure to keep the movie solidly in R-rated territory as she tells a story that revolves around the developing friendship between Lopez’s Romona and a fledgling dancer who goes by the name Destiny (Constance Wu).

Early on, Romona takes an eager-to-learn Destiny underwing, teaches her the rules of the pole, and offers to partner with her. When two women offer lap dances to drunken finance guys in the private rooms of clubs, the work proves more lucrative (and probably safer) than solo efforts.

Much of the movie consists of energetic sequences that gleefully chronicle the economic ascent of the two women. We also learn a little about each woman. Romona has a daughter. Destiny supports an aging grandmother who doesn’t offer much resistance when presented with thick wads of cash.

Mimicking the rush of a downed shot of vodka and buoyed by the abandon of the big-ticket shopping sprees in which the women indulge, Hustlers wastes no time getting down to business, drama on speed-dial. Written by Scafaria and inspired by a magazine article by Jessica Pressler, the screenplay races across a familiar dramatic arc.

In this case, the intoxications of the movie's early scenes receive sober comeuppance in 2008 when the market collapses. As stocks sink, so do the fortunes of the night clubs and strippers who have become part of the lower Manhattan scene.

After a few unsuccessful attempts to land day jobs, Romana and Destiny strike out on their own, pursuing an activity they call “fishing.”

They lure prosperous businessmen into nights of clubbing, drug their drinks with a combination of Ketamine and MDMA, and pretend to keep pace. The women then proceed to relieve the mark of his credit cards. Said cards get pushed to their limit. Romona and Destiny earn big bucks while ensuring that the clubs and any assistants receive their cuts.

It all seems too good to be true, crime with a safety net. These supposedly savvy sharks aren’t likely to admit they’ve been fleeced out of hundreds of thousands of dollars in their pursuit of a good time.

Lili Reinhart and Keke Palmer play strippers who join Romona and Destiny in their felonious enterprise. Neither character is especially well-developed but the movie gives them each comic moments. Reinhart's Annabelle, for example, tends to throw up under stress; i.e., at the worst possible moments.

I’m not sure that it adds much, but the movie employs a framing device. Destiny narrates the story as she’s being interviewed by a journalist (Julia Stiles) who plans to write a magazine article about how the women raked in money, did a fair amount of high living and ultimately got caught. The bond between them eventually eroded.

It’s worth noting that Hustlers adopts the women’s point of view in depicting men, nearly all of whom seem to be class-A jerks who deserve what they get. Many are married men who lord it over the lap dancers, often throwing money at them in a demeaning fashion. Hustlers is a movie about women -- not about the men who think they're entitled to exploit them.

I wasn’t looking at my watch, but my impression was that Wu receives more screen time than Lopez. If so, there's still no question that Lopez is the movie’s star. Her Romona exudes confidence and entrepreneurial savvy. When she teaches Destiny how to pole dance, you can tell that, no matter what anyone thinks, Romona controls her body. Smart enough to use her physicality to dominate any situation, Romona remains unscathed by her line of work. She's a force.

The women are motivated by a simple equation: Economic self-sufficiency equals freedom. So what if what they do is illegal? The whole country’s nothing more than a rigged game anyway. Why shouldn't they get their share?

Although deeply embedded in the fabric of the movie, this simplistically cynical ethos never seems entirely convincing. To paraphrase Romona: Some people have the money; others dance for it. Pole dancing as a metaphor for the way society works? I didn't buy it.

Full of flash and performance verve, Hustlers nonetheless remains a showcase for Lopez -- with entertaining cameo help from rappers Cardi B and Lizzo. I don't what it has to do with anything, but it seems worth noting: Cardi B's Bronx accent is thick enough to strip the pretension off just about anything.